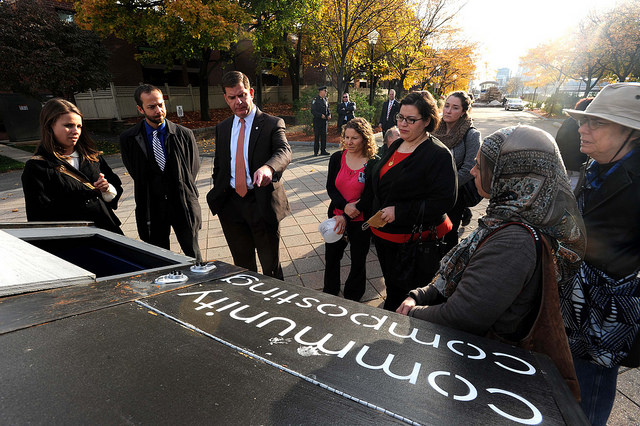 Today Mayor Martin J. Walsh announced the release of the draft 2014 Climate Action Plan for public comment. The City also released the latest municipal greenhouse gas emissions report for fiscal year 2012-2013, which demonstrates a 27 percent reduction in adjusted carbon emissions* since 2005. The City of Boston has reached its goal of a 25 percent reduction in greenhouse gas emissions seven years ahead of schedule, and is evaluating setting a new goal.

“The 2014 Climate Action Plan update provides a transparent and analytically robust strategy for reaching our climate goals,” said Mayor Martin J. Walsh. “The City of Boston is leading by example through its emissions reduction efforts and we continue to prioritize cost-saving measures that also help the environment.”

The 2014 Plan is the second iteration of Boston’s climate action plan, which is updated every three years. When completed, the final 2014 Plan will include:

The draft plan will be open to public comments for three weeks. It will also be the focus of the Mayor’s second Civic Academy on November 17 at the New England Aquarium, 6:30 PM. Please call the Mayor’s Office of Neighborhood Services with any questions about the Civic Academy Program at 617-635-3485.

After reviewing and incorporating public comments and finalizing graphics, the final plan will be released in early January. The draft plan is available online for download here. Feedback may be submitted via emailCAP2014@cityofboston.gov, online at Engage.GreenovateBoston.org, or letters sent to:

“The 2014 Update establishes a short-term action plan to reach Boston’s 2020 goals, as well as creates a vision for what will essentially be a carbon-neutral Boston by 2050,” said Brian Swett, Chief of Environment, Energy and Open Space. “While municipal emissions are less than three percent of the citywide total, the City’s leadership is critical for encouraging other businesses, organizations and individuals to take actions of their own.”

The municipal greenhouse gas inventory, which is calculated every year, is available online. The inventory estimates the city’s carbon footprint from energy and fuel sources such as heating and cooling, electricity use, and vehicles from across all City departments and agencies.

Reductions in municipal electricity use and the transition of the region’s electricity generation to lower emission energy sources have been the most significant drivers of the the City’s overall reduction in greenhouse gas emissions. Considerable progress has been made via building and street light energy efficiency improvement projects, renewable energy projects, and Boston’s growing fleet vehicle sharing program, FleetHub. In addition, two major solar projects on municipal buildings went online in early fiscal year 2013–a 120 kW system at 400 Frontage Road, and a 95 kW system at Boston Archives Center.

In the past year, the City has continued this progress through increasing the LED streetlight retrofit program, and arecent light bulb replacement initiative, which took advantage of the Massachusetts Department of Energy Resources’ free lighting upgrade program. Through this program, the City replaced 10,000 light bulbs in Boston Public Libraries, Boston Public Schools and other municipal buildings. As a result of this program, the City will save over two million kilowatt hours of electricity and $285,000 each year. That alone is enough electricity to power approximately 270 homes in Boston.