BOSTONIAN SAILS ACROSS THE NORTH ATLANTIC IN SEARCH OF CLIMATE ANSWERS 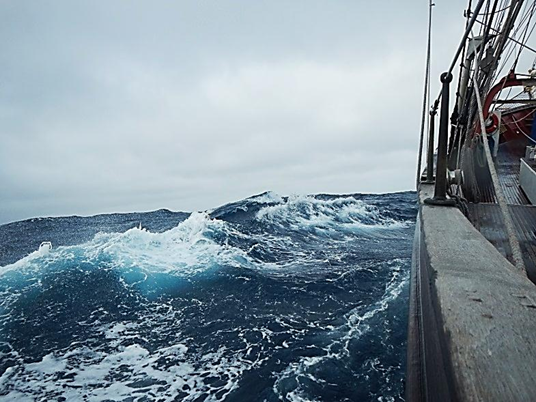 During the month of June I had the unique opportunity to sail across the North Atlantic Ocean and study the ocean I was crossing along the way. I set sail from Woods Hole, MA on June 2, 2014 aboard the 134-foot-tall ship Corwith Cramer and made it to Cork, Ireland on June 27, 2014. The vessel belongs to the Sea Education Association (SEA) out of Woods Hole, MA and the Transatlantic Voyage which I and 34 others were a part of was through a program SEA offers called SEA Semester. I’d like to thank SEA and all the crew and students onboard Cruise C-253 for their hard work and good companionship during our voyage. All the science conducted aboard the vessel included here has been credited to the appropriate student researchers, and is not my own work unless stated.

The month of June showed me a part of the globe which has disappeared to the twenty-first century:  the middle of the North Atlantic Ocean. It seems to me that when I speak about my voyage across this ocean people are shell-shocked. No one seems to have a response; it is as if the ocean is too big and too unknown for any human to even think about crossing it. This reaction is a cause for alarm. For one, the ocean is and always has been a major player in not just the transportation of us, as a global civilization, but as a mode of trade and commerce. Secondly, the ocean is a vast resource to our everyday life. It provides energy, food and acts a reservoir to our waste. Lastly, the ocean is our neighbor and instead of being intimidated by it we should be in awe of all it has to offer.  So, how do we, as a global community, go from being shell-shocked to being engaged about not just the North Atlantic Ocean, but all of Earth’s oceans?

The answer is simple: we educate ourselves. A few weeks ago I asked a group of kids how many oceans there were. They could not answer the question. I then asked if any of them had heard of a gyre before. The answer was no. Can you answer those questions? Oceans cover more than 70% of the Earth’s surface, yet most people know very little about them. Even oceanographers are finding new things every day that a decade ago no one knew existed.

Through these studies we were able to see that the ocean is a well of undiscovered biological, chemical, and physical properties. However, some of our results are cause for concern. For example, SEA has been conducting plastic research for years and on this cruise Polly Carrico, Liz Carter, and Beckett Colson continued that research by collecting and counting macroplastic pieces (plastic pieces larger than 333 microns (.0333 cm) in size or large enough to be caught in Corwith Cramer’s neuston net). They concluded that the plastic debris they collected worked out to an average macroplastic density of 7,409 pieces per square kilometers (1 square km is equal to about 0.38 square miles) of ocean surface, with only two tows containing no plastic pieces. In other words, there are a lot of plastic pieces suspended in the ocean.

My research, which I conducted with Ellice Patterson and Anna Massefski, showed that the Western Basin of the North Atlantic Ocean is Nitrogen limited at the surface of the ocean. This means that nitrogen limits the growth of phytoplankton, the primary producers. This result was not shocking as it is typical of most ocean surface waters. However, we also found variation in nutrient (nitrogen and phosphorous) concentrations along our cruise track due to changes in water sources via upwelling (deep water being pushed upward) and downwelling currents (surface water being pushed downward). This resulted in variations in primary productivity levels, too, because phytoplankton need these nutrients to grow just like plants do on land. Simply put, the ocean is a diverse habitat that has many varying factors.

So, what is the big deal with plastic and phytoplankton? Well, they are both easy to connect to Boston. When living within the confines of a city like Boston it is often hard to remember that all of our actions have global consequences. However, when sailing across the North Atlantic those ramifications are easy to see. When you are on watch and you see large pieces of plastic floating by the ship you know where it came from: land. You know that the ocean has new hot spots for phytoplankton growth because of its ever-changing enhanced nutrient levels from runoff and pollution of a city like Boston. Living on a ship for almost a month showed me how important it is to educate myself about consequence. Do we really need twenty minute showers when Earth only has so much drinking water? Do we need to throw away each plastic bag we acquire, or can we reuse them over and over again? Do we need to leave our lights on when we aren’t in the room when there is only so much energy being produced?

Yes, hypothetical questions can be debated over and thrown away very easily, but they can also be spring-boards to educate ourselves about the unknown. I was able to see the power of the ocean when we sailed through a strong gale that produced gusts of winds over 60 knots and max wave heights close to 25 feet. I was able to learn that years of science can always be added to and most of our “necessities” on land are merely luxuries. No one should be shell-shocked that I crossed the North Atlantic Ocean. Instead, everyone should be shell-shocked that we know so little about the ocean I crossed and that cities around the globe are slowly damaging all of the life and energy the ocean has to offer. 3,046 nautical miles is a long way to travel in order to see that these things need to change. Boston, what can you do to educate yourself and protect the ocean?

Jeffrey Morgan is an undergraduate student studying Marine Science at Boston University. He spends his summers sailing on tall ships and learning about the ocean.