A PLAN TO PROTECT EAST BOSTON FROM SEA LEVEL RISE 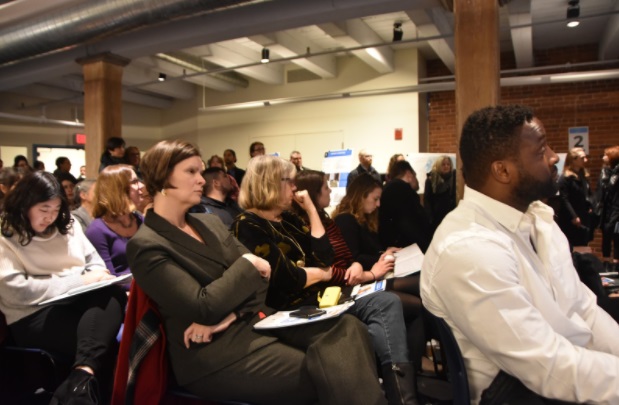 Residents of East Boston gathered last week with researchers from the University of New Hampshire who presented a plan for protecting the neighborhood from future sea level rise and storm surge flooding.

“East Boston is like a bowl,” explained lead researcher Dr. Paul Kirshen, who’s plan identified six critical points that – if protected—could stop the water from flooding in and filling up that bowl.

The goal of the meeting was to show what strategies could help protect the neighborhood such as sea-walls, levees, natural dunes, removable flood walls, and raise-able gates; and to hear resident feedback on these ideas.

Overall, residents were very supportive of the plan, which proposed a series of 2.5 to 5 foot sea-walls in the six locations identified, that could be expanded over time as the city gained more information about climate impacts.

They felt that this would keep them safe and prepared, and would protect essential services such as utilities and infrastructure in the event of flooding. Residents reported that community buy-in would be greatest for strategies that served multiple purposes like increasing waterfront access and green space, and that would beautify the neighborhood.

This could be done through landscaped green flood walls that had walking and biking paths built on top of them, as shown below, for example. Residents also expressed a preference for building higher flood protection now that would protect the community over the longer-term, rather than depend on expansion over time.

On board with the climate preparedness plan, the real question for East Boston residents was “who’s going to build this?” and “when?” As Boston continues to understand its vulnerabilities to climate impacts and the strategies it needs to take to prepare its residents, it’s events like these that show that communities are ready to see adaptation strategies in place in their neighborhoods. The City of Boston, with input and feedback from the community, is updating its climate action plan this year with a major focus on climate preparedness. You can contribute to the conversation by visiting engage.greenovateboston.org.