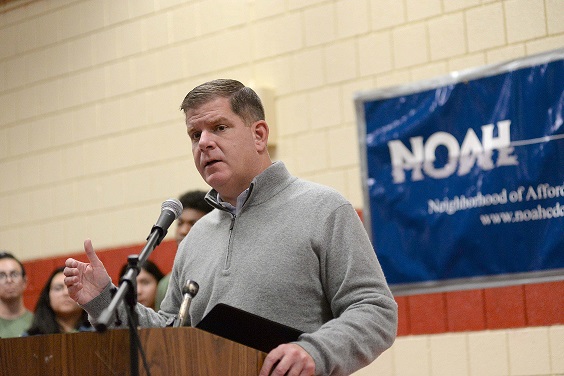 Earlier this morning Mayor Walsh addressed an international delegation at the US-China Climate-Smart/Low-Carbon Cities Summit in Beijing, which unites cities from the two countries to exchange best practices for climate change mitigation and adaptation.

Mayor Walsh stressed the responsibility and opportunity that cities have to make a significant impact to reduce global greenhouse gas emissions through shared learning and innovative approaches, and later Secretary Kerry announced that next year the Summit will be held in Boston.

According to the United Nations, in 1950 just 30 percent of the world’s population lived in urban areas. Today, that figure is 54 percent or greater. And by 2050, two-thirds of the world’s people are expected to be living in cities. While addressing a delegation of US and Chinese city officials Mayor Walsh explained why cities have a responsibility to lead in climate action:

“This is a trend — one of many — that is bringing China and the United States closer together. As we become more urban, we become more connected: through technology, through economic relations, through cultural exchange. Therefore as cities, we take on greater ability — and greater responsibility — to collaborate, to innovate, and to lead together on the world’s hardest challenges.

There is no more pressing, or defining, global challenge than climate change. We know we must be making investments now to create a more sustainable future for the world we share.”

After Mayor Walsh addressed the delegation, United States Secretary of State — and Massachusetts native — John Kerry announced that Boston will host the 2017 US-China Climate Leaders Summit. The 2017 Summit will bring hundreds of leaders from around the world to Boston next summer to discuss and share experiences in building low-carbon, climate-resilient communities.

“Boston has long been a leader on climate action, and today that’s underscored not only by Mayor Walsh’s presence here in Beijing for the second US-China Climate Leaders Summit – but also by the announcement that Boston will host the third Leaders Summit next year,” said Secretary Kerry. “When nearly 200 nations adopted a global climate change agreement in Paris last December, we knew that success would depend on commitment at the local level.  As a coastal city, Boston is approaching this challenge with the urgency it demands by pursuing a first-of-its-kind approach to preparing for rising sea levels and extreme weather through Climate Ready Boston, while also setting ambitious greenhouse-gas reduction goals with Carbon-Free Boston.  And as a son of Boston and someone who has focused on climate change for decades, I’m particularly proud of my hometown’s leadership in this global effort.”

Boston’s commitment to host the third US-China Climate Leaders Summit is a huge opportunity to not only share and learn from city leaders on a global scale but will help to elevate the progress we’re making on Boston’s climate goals. Boston’s leadership abroad is a reflection of our leadership at home, and that’s an important message we want others to see firsthand.

The Mayor also joined leaders from around the world in signing a Memorandum of Understanding between the Compact of Mayors and the Alliance of Peaking Pioneer Cities. The Alliance of Peaking Pioneer Cities (APPC) supports China’s national peaking of CO2 emissions by 2030. The Compact of Mayors (with which Boston is compliant) is an important measure in achieving climate commitments by providing a more transparent platform for cities’ climate progress. Signatories of the Memorandum of Understanding commit to exploring the best approaches for green and low-carbon development together.